Starting this week, we’ll be posting regular updates from our friends at the Juneau Police Department, about all the exciting 2017 Year of Kindness (17YOK) projects going on throughout the city. Occasionally, we’ll also bring you a few longer-form updates on extended projects and campaigns that the department and citizens have put together — stay tuned!

We’re happy to bring you this update from Juneau Police spokesperson Kris Sell:

About 60 people dropped by the first official event of 17YOK (2017 Year of Kindness). The gathering was at Sandy Beach on Dec. 31, 2016. There, participants wrote down negatives they wanted to leave behind, shared food, roasted marshmallows, and enjoyed performances by the Yees Ku Oo (New Beginning) multi-cultural singing and dance group.

Member Nancy Keen was one of the drummers, along with junior Officer of Kindness and drummer Thea Duncan. JPD Officer Kevin Fermin wrote down some negatives to leave in 2016, as did Jennifer Jozwiak.

The next day, on Jan. 1, 2017, the first day of the new year, about a hundred people came to the Auke Recreation Area for a polar plunge (where willing participants jump into an cold body of water) and to leave behind the negative. At both gatherings, socks were collected so that JPD officers could give out socks the first Saturday of each month during 2017.

About 60 people dropped by the first official event of 17YOK (2017 Year of Kindness). The gathering was at Sandy Beach….

Across the city, multiple people engaged in random acts of kindness as well, as documented by the department:

Remember: even the smallest, most insignificant acts of kindness—such as loaning a pen or allowing someone to go ahead of you at the coffee shop—can mean the world to someone else. Get inspired by the people and officers of Juneau this week and let us know how you got kind!

It’s been a while, but we’re back with an update on the 2017 Year of Kindness (17YOK) in Juneau, Alaska. The Juneau Police Department and local residents have been carrying out exciting projects... 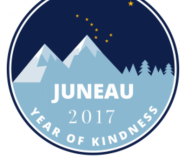 It’s a new year and we’re ready to kick things off in a big way! Random Acts is pleased to announce a partnership with the city of Juneau, Alaska for...